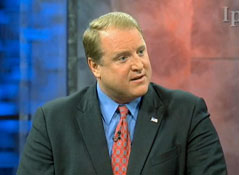 Governor Chet Culver, a Democrat who is seeking reelection, says he relishes the chance to defend two of his major actions as governor.  The three Republicans who are seeking their party’s nomination for governor have criticized Culver for spending taxpayer money on preschool programs and for borrowing money for his I-JOBS initiative to finance construction projects.

“I want to be the best connected state in America,” Culver says. “That’s why we’re investing hundreds of millions of dollars in infrastructure repair across this state.”

But Republicans say Culver borrowed far too much and future generations will have to make the final payments on the borrowing plan.  Culver counters that state gambling taxes are being used to pay off the debt and the borrowed money was needed for flood recovery as well as general building projects.

“One of my frustrations in terms of those that have opposed I-JOBS is what their your solution?  How do you help the folks in Oakville and Charles City and Elkader?” Culver asks.  “How do you replace that fire station in Charles City if you don’t help with state resources? What, do you have a bake sale?  Do you have a $300 million bake sale to pay for flood recovery?”

All three of the Republicans who hope to face Culver in the general election say it’s time to halt state spending on preschool programs. “I could just not disagree more.  I hope every voter understands that that is on the ballot on November 2nd,” Culver says.  “Do we want to continue to invest in our children or not.  I say: ‘Yes, we will.'”

Many top managers in the governor’s office and in Culver’s reelection campaign have said, ‘I resign’ this spring. Culver says he has “brought on a lot of new, talented people” to replace his chief of staff, communications director, press secretary and campaign manager.

“It is completely normal to have people come in and out of the private sector into government.  Not every state employee is a career civil servant,” Culver says.  “…Like administrations before mine, you typically have people that come and you have people that decide to leave and do other things.”

Culver says he has his “A-Team” on board now to run the governor’s office and his reelection campaign.   Culver also rejects complaints that his chief of staff resigned to become manager of a Cedar Rapids construction project that is financed, in part, with a state grant.

“I think any of those questions should be left to the former Republican speaker of the (Iowa) House and now-mayor of Cedar Rapids — Mayor (Ron) Corbett and the non-partisan city council in Cedar Rapids that hired Mr. Frew,” Culver says.  “Those decisions were made by the mayor and the city council.”  Culver made his comments during taping of this weekend’s edition of “Iowa Press” which will air Friday night at 7:30.  Culver is asking voters for a second term as governor and he plans to formally kick-off his reelection campaign next week.  On the I.P.T.V. set, Culver said he’s convince voters don’t want to go “back to the ’80s” — a reference to former Governor Terry Branstad, a Republican who is trying to win his party’s 2010 nomination for governor enroute to a fifth term in office.