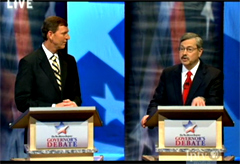 The final debate among the three Republicans who’re running for governor was held yesterday, and the 16-year record of former Republican Governor Terry Branstad was a primary focus.

“Former State Auditor Dick Johnson said you kept two sets of books. You grew government two-and-a-half times — $1.2 billion over the rate of inflation (and) increased taxes and fees over 30 times,” Vander Plaats said. “Why should Iowans trust you with their wallet again?”

Branstad defended his record. “We reduced taxes by a net of $124 million, including the elimination of inheritance tax for all children and grandchild; cut the income tax top rate from 13 percent to 8.98 percent; indexed it for inflation; reduced our dependency on property taxes; got rid of the property tax on machiner & equipment,” Branstad said. “That’s why I received the endorsement of Iowans for Tax Relief because I’m a proven tax-cutter.”

The other Republican in the race, State Representative Rod Roberts, stressed that he has pledged not to raise taxes if he’s elected governor. “I think it’s very important that Iowans have some sense that a Republican governor would take a very different approach to leadership,” Roberts said.  “Cutting taxes will stimulate our economy.”

The candidates were asked about a wide-range of issues, from road repairs to illegal immigration.  All three said if they are elected governor, they’d push for a law that would require women seeking an abortion to view an ultrasound first.  Governor Chet Culver, a Democrat, has pledged to “fight” for abortion rights if he’s reelected this fall.  Roberts said abortion will be a major issue in the general election because people hold “strong views” on both sides of the debate.

“I have a very strong pro-life not only position as a legislator if you look at my 10 years of service — 100 percent, consistent, pro-life legislator –but more importantly I believe that life in the womb is that of an unborn child,” Roberts said.  “And that child deserves protection.”

Branstad said abortion is “always” an issue in campaigns. “I have a daughter and a daughter-in-law that are both going to have babies this year.  I’m very pro-life.  My son, Marcus, was born on January 22, the anniversary of Roe v Wade,” Branstad said, a reference to the U.S. Supreme Court ruling which legalized abortion. “I believe that Iowa needs to have a pro-life governor.”

Vander Plaats said Governor Culver is “definitely” on the “wrong side” of the abortion issue.  “I think the citizens of Iowa want to know very clear where do you stand on the life issue.  I’ve been very clear.  I’m 100 percent for the sanctity of human life, from natural birth to a natural death,” Vander Plaats said.  “So I believe abortion is going to be a big issue, but I believe another core issue in this campaign is traditional marriage.”

On the topic of gay marriage, two of the candidates said they’d only appoint justices to the Iowa Supreme Court who are opposed to gay marriage.  Vander Plaats said he’d impose a “simple” litmus test. “I want Supreme Court justices to again read the Constitution before they offer an opinion,” Vander Plaats said. “But more importantly Iowa needs to have a leader who will hold them in check when they don’t do that.”

Branstad directly responded to Vander Plaats. “I think he’s naive when it comes to the whole appointment process.  The governor cannot ensure how a member of the Supreme Court reads the constitution,” Branstad said.  “It just doesn’t work that way.”

And Branstad pointed out there’s a judicial nominating commission that presents two names to the governor when there’s a vacancy on the court and governors must choose one of those people.

You can watch the debate online at www.iptv.org or www.DesMoinesRegister.com, the two organizations which sponsored yesterday’s debate.  Read more about the debate here, or check out the Radio Iowa blog post with a more detailed review of the debate.