You are here: Home / Education / Governor focuses on preschool funding as campaign gets started 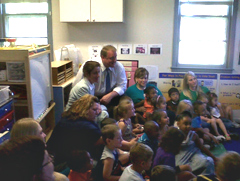 Governor Culver poses for a photo with preschool kids.

Governor Chet Culver and his wife visited a preschool classroom in Des Moines this morning  to highlight one of the issues Culver plans to push in the November election.

Terry Branstad, the Republican candidate for governor, has said he’d stop the state funding Culver has extended to preschool programs.

“Terry Branstad is on the record saying that he does not believe it’s a good investment to use public funds to support preschools like Bidwell and other preschools in 325 school districts,” Culver said.

“In my budget we have $90 million for preschool. That $90 million is at risk if Terry Branstad becomes the governor because he does not support publicly-financed preschool.”

During a May 1st debate, Branstad said he supported the federally-funded “HeadStart” preschool program for low-income children from at-risk families as well as state subsidies for other low-income families who cannot afford private preschool. But Branstad said he would end state funding for “universal” preschool. Culver said that means Branstad would cut off funding to public preschools where 21-thousand children are enrolled today.

“That is a fundamental choice on November 2nd,” Culver told reporters. “You have all the pollsters, the pundits that are assuming — they want to decide a race before it’s even started. The people of Iowa need to make a choice and they need to make an informed choice. They need to know Terry Branstad is on the record saying he wants to pull as much as $100 million in funding for these preschools. If he does that, these preschools will not survive.”

The Culvers read a book to a class of three- and four-year-olds this morning. “The mice chased every elephant out of the palace,” Culver read as he held the book up for the kids to see the illustrations. “Look at all those elephants leaving the palace,” Culver said, prompting one of the kids in the class to exclaim: “Holy Moly!” The kids talked with the First Couple about the lessons in the book, spending a great deal on the topic of sharing, then the kids sang a song.