You are here: Home / Education / Branstad: no more “free” preschool 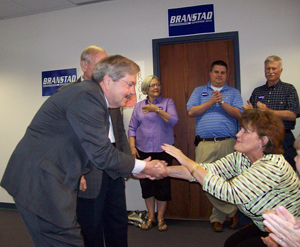 Terry Branstad talks with a supporter during a campaign event.

Terry Branstad, the 2010 Republican nominee for governor, says the state cannot afford to provide “free preschool” to three and four-year-olds in Iowa.

“I think I’d want to restructure it to make it more of a public-private partnership, working with the non-profits that already provide preschools and also with private sector businesses that are supportive of that and providing scholarships to students that have financial need,” Branstad says. “What I don’t want is the state to take on the additional obligation of free preschool to everybody.”

Branstad says for many years Iowa parents footed the bill for private preschool for their children and the state should return to that policy. “Those that can afford it I think have been able to do that in the past…and my children, as long ago as that was, my grandchildren are going to preschool now,” Branstad says.  “…I’m very supportive of preschool, I just don’t think it should become an obligation of the public schools that we now instead of K-through-12 we have pre-K through 12.”

Culver argues finding a quality preschool has been difficult for parents in many parts of the state, and the bill for preschool is too high for many parents. “The average cost is $400 to $500 a month for families,” Culver says. “…That’s why…the state needs to step in and help those families that can’t afford a private option.”

Culver says this is a key difference between him and Branstad.  “In my administration we’ve gone from about 50 percent of families that have access to these preschools to 90 percent,” Culver says.

About $90 million was set aside in this year’s state budget to finance public preschool programs.  Branstad says that money should have been spent on kindergarten through 12th grade programs in the state’s public schools.

Branstad made his comments this morning at Iowa Public Television after taping “Iowa Press,” which will air this evening st 7:30.  Culver made his comments Wednesday after a visit to a Des Moines-area preschool.