This is the second in a series of stories about the Iowa National Guard training.

Iowa National Guard soldiers are training at the 53,000 acre Camp Ripley in Minnesota as they prepare to deploy to Afghanistan this fall. Radio Iowa’s Dar Danielson caught up with a military police unit from Marshalltown as they worked on handling roadblocks during training.
Dar Danielson ING report 1:40 MP3

The units go through several training scenarios they call “lanes” were the threats to them can be multiple or change at any moment. Hollywood style special effects are used to make things as realistic as possible. In one typical exercise a truck pulls up to the M-P’s roadblock — and refuses to stop when a shot is fired at it, and then it explodes. Sergeant Scott McClain says there are a variety of “Vehicle Bourne Improvised Explosive Devices” or V-BID.

McClain says that’s the purpose of this lane, to react to V-BIDS, react to civilian traffic, react to ambush, react to far, which is a sniper attack. In this exercise it’s determined a soldier is injured, and the M-P’s then have to get the soldier to an open landing zone where a first aid copter can take him out quickly.

They form a circle perimeter around the landing zone with their armed vehicles to prevent any further attacks on the copter or wounded. The action comes with on the spot instruction as another sergeant yells at a soldier to turn his gun the other way. A copter lands and takes away the wounded man and once the site is secure, the soldiers then move to an After Action Report, where they break down everything done right — and those done wrong — and get ready to try it again. 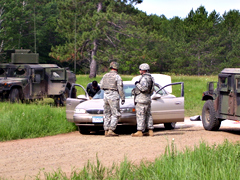 Soldiers check out a car used to simulate an explosion during a traing exercise.

The more confidence we build in them the easier our jobs become…the other piece is just training, consistent training, refining our techniques,” McClain says. The Marshalltown M-P’s will be among some 28-hundred Iowa National Guard soldiers that got to Afghanistan in the fall.

See a related story below:
https://www.radioiowa.com/2010/06/23/iowa-national-guard-training-mixes-experience-with-newcomers-in-preparation-for-afghanistan/