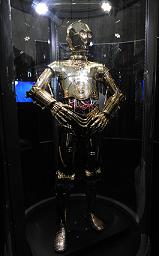 Some of the world’s most recognizable props from the top-grossing film series in history are in central Iowa today for a one-day only showing. “Star Wars in Concert” features an 86-piece choir, a 60-piece orchestra and film clips from the six movies shown on a three-story tall, high-def LED screen.

Before the music starts, concertgoers will wander through a maze of movie memorabilia, the original Darth Vader costume, Chewbacca, Yoda and dozens of other artifacts from the galaxy far, far away.

David Iskra is the exhibit curator. “I have a lot of jealous friends,” Iskra says, laughing. “When I was a kid, I was a big ‘Star Wars’ nut and, of course, my parents used to yell at me to do my homework. I was busy drawing and watching ‘Star Wars.’ I got told that I would never get a job doing this and I’d better study hard. So I showed them!”

Other items on display will include pages from legendary composer John Williams’ original hand-written sheet music for the movies. Iskra couldn’t reveal an insurance price tag for the traveling exhibit, only to say it’s — out of this world.

“If I were to damage the Darth Vader costume, I can’t exactly go and buy another one that was used in the films,” Iskra says. “Like anything else that’s valuable, if you put it on eBay, one week, some crazy collector might spend a fortune on it, and then the next week, they might not, so it really is priceless.”

He says another highlight of the show is the narrator — actor Anthony Daniels, who played the robot C-3-P-O, the only character to appear in all six of the movies in the “Star Wars” saga. Iskra says he got to hand-pick the items that went into the exhibit from a giant warehouse at the Skywalker Ranch in California. It was an incredible thrill, he says, as the facility also houses unique items from other George Lucas-produced films, like “Raiders of the Lost Ark.” 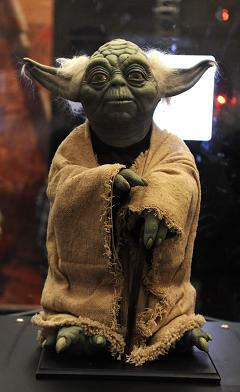 As cool as his job may be, Iskra says it’s also an incredible responsibility, safeguarding these precious pieces of cinematic history. “One of our biggest challenges is getting in and out of the building every day without breaking stuff,” Iskra says. “Guitars come in road cases but Darth Vader and Chewbacca do not. We had to custom-build everything. You couldn’t get anything off the shelf. We keep everything protected. We have low-power LEDs so there’s no heat in there and we keep everything in good condition.”

There are two shows, today only, at 2:30 PM and 7 PM Wells Fargo Arena in Des Moines. It is the concert’s only Iowa appearance, though there is another stop Wednesday night in the Quad Cities, at the i-wireless Center in Moline, Illinois. For information, visit: www.StarWarsInConcert.com