You are here: Home / Fires/Accidents/Disasters / Work continues to restore power after weekend storm 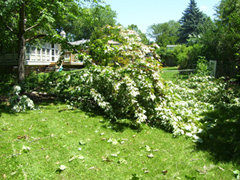 Hundreds of trees and tree limbs were blown down by the weekend storm.

Power crews are continuing work today to get electricity restored after an early morning storm that roared through Iowa Sunday.

MidAmerican spokesperson Ann Thelen says at the peak of the storm there were about 38,000 customers without power and they implemented their emergency system to bring in crews from around the state to help restore the power.

Thelen says they still had some 800 customers without service this morning and they hope to have all service restored by this afternoon. She says the storm caused multiple problems. Thelan says they had a combination of a lot of poles down, trees falling and bringing down power lines, along with lightening strikes on poles that created a lot of issues.

This storm cause some problems that were a little different from the average summer thunderstorm. “What was unique about this versus some other storms is that we had a high number of incidences, we had more than 800 outages affecting 38,000,” Thelan says, “so, every time you have an outage you needed to send one or two crews to that one outage location, and in some cases we had a situation where we had seven poles down and they were serving 10 customers. So seven poles needed to be replaced in order to get just 10 customers back on.”

Thelen says there are some cases where customers may have to call an electrician to make repairs before the power can be restored. She says in cases where the electric service line comes into the house, the “mast” may have pulled away and then it is the customer’s responsibility to get an electrician out to take care of that repair.

Thelen says if you notice the rest of your neighborhood has power, but you don’t, then you should call MidAmerican.

Ames reports nearly 600 customers hooked to the city-owned electric utility are still without power today. Some 5,000 Ames residents were without power following the storm Sunday, which had wind gusts up to 74-miles an hour, along with lightning and hail.