Flood waters have damaged an historic, 127-year-old bridge in Poweshiek County. North Skunk River Greenbelt Association Executive Director Julie Bowers says the McDowell Bridge  in the southwest corner of the county was swept off its piers sometime over the last few days.

“The waters got so high that it lifted the bridge off its piers, took her downstream about the length of a football field and gently laid her on the bank,” Bowers said. Much of the bridge is still hooked together.

Bowers has been leading an effort to restore the bridge, which was erected in 1883. She’s discouraged by the latest setback, but is not giving up. Bowers believes the bridge can still be pulled out of the water and restored. 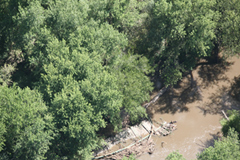 “The iron that’s used in this bridge, it’s not a steel bridge, has a lot of properties that are not inherent in iron today,” Bowers explained. “So, it can be worked, it needs to be worked at specific temperatures…but it’s not that much of an uphill battle.” A fundraiser for the bridge’s restoration, featuring seven bands, is scheduled for August 28th at the Gametime Tavern in Grinnell.