Grounds crews are installing or have installed solar powered trash compactors on the campuses of Iowa State University and the University of Northern Iowa. I.S.U. was the first to test the solar compactors, and the school’s director of sustainability, Merry Rankin, says it proved to be successful in decreasing the work involved in collecting the trash.

Rankin says the compacting takes place through solar energy stored in a 12-volt battery, and the collect which had to be done two or three times a day, was down to once a week.

The associate director of the U.N.I. physical plant administration, Bill McKinley, says their goal is the same. McKinley says they believe the containers will reduce their need to be emptied from once or twice weekly to once every three weeks. He says that will save them money in labor. 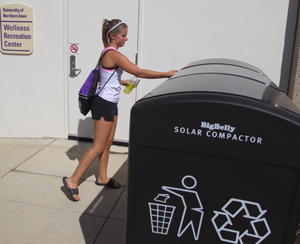 He says it wasn’t part of the justification for the program, but the grounds staff earn between $14 and $20-an-hour and the containers should save them between $50 and $100 dollars a week. U.N.I. is also installing six recycling containers that accept plastic bottles and paper. McKinley says they’re putting the containers in high traffic areas to make them visible and easy to use.

“That’s the thought certainly, is that the more convenient you make it, the more likely that people are to participate,” McKinley says. He says the overall goal is to increase recycling. McKinley says they do recycle in buildings and computer centers, and collect some 200 tons of paper each year and more than 100 tons of cardboard. He says these containers will increase the recycling efforts.

U.N.I. is installing six of the solar trash compactors.