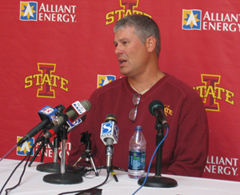 Iowa State hosts 10th-ranked Utah this Saturday for a 6 p.m. kickoff at Jack Trice Stadium in Ames. The Cyclones are coming off a 52-38 win over Texas Tech to improve to 3-2 overall and 1-1 in the Big 12. I.S.U. coach Paul Rhodes says a number of players made big plays at important points of the game.

“There were a lot of key plays in the game and a lot of players that contributed to the that,” Rhodes said. “Austin put the ball on the money on some of those big pass plays and Darius Reynolds made a big catch, Collin Frankin made a big catch and Josh Lenz made a big catch. Those balls, in the past, have gone off fingers, been deflected by a defender or come up a little short. We made (plays), yes, but we made them with consistency – which was even more important.”

Utah is coming off a bye week after starting the season 4-0. Rhodes says it appears the Utes are clicking on cylinders. “That’s a team that understand exactly what they’re supposed to do and plays it lights out,” Rhodes said. “They play extremely confident.” The Utes have scored wins over Pittsburgh, UNLV, New Mexico and San Jose State. Rhodes says they’ve done so by putting a lot of points on the board.

The Utes average 44 points a game. Utah finished 10-3 last year. Rhodes says a win over the Utes would be huge, but it wouldn’t be any bigger than any other victory. They’re undefeated and ranked 10th for good reason. They’ve been to BCS bowls and if they remain undefeated and people fall out, they could find themselves right back in that picture again,” Rhodes said. “So, yeah, it’s a marque game and would be a marque victory, but it wouldn’t count any more than those others.”

Cyclone quarterback Austin Arnaud threw for 190 yards and a career high four touchdown passes in the win over Tech. Rhodes says Arnaud’s confidence is sky high. “What I tell our players, and Austin’s included in this, you don’t have to do anything out of the ordinary, but you do have to do what you’re supposed to do extremely well. At time, he did that Saturday and the football team benefited…and his confidence level has risen because of that,” Rhodes said.

Iowa State’s Jeremy Reeves, who returned an onside kickoff 42 yards for a touchdown in the win of Tech, has been named the Big 12 special teams player of the week. I.S.U. has learned its game on October 16 at Oklahoma will kickoff at 6 p.m. It’ll be the Cyclones fourth straight night game.