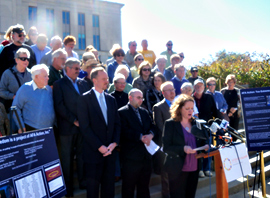 A group of clergy called the Iowa Interfaith Alliance today said a campaign that’s seeking to vote out three Iowa Supreme Court Justices is using out-of-state money to try and influence the outcome.

“It is clear that the extremist group from Tupelo, Mississippi, American Family Association, or known as A.F.A., is financing the Iowa For Freedom in an attempt to hijack Iowa’s courts,” Terrell says.

She says it is clear from the ads Iowa For Freedom is running, that the group is “an agent of A.F.A. action.” Reverend Mark Stringer of the First Unitarian Church said Iowa For Freedom is misleading Iowans about the retention vote on the justices who were part of the ruling striking down Iowa’s ban on gay marriage.

Stringer says Iowa For Freedom is not from Iowa, he says it is funded by A-F-A, which he describes as “an out-of-state extremist group, with a radical agenda, and a record of hate.” Stringer says,” I am deeply disturbed to think that our retention vote might be poisoned by a group that is not from Iowa and does not share Iowa’s values.”

Iowa for Freedom is led by from Republican candidate for governor, Bob Vander Plaats. Terrell was asked why they are concerned as the group is not doing anything illegal in taking money from A.F.A. “It may be legal, does that mean it’s moral?,” Terrell said. Terrell said Vander Plaats is holding himself up as an organization based on his faith tradition and saying we ought to inject politics into our court system. She says Vander Plaats is doing this while being paid by a group that “perpetuates hate, and hate is not something that we want to be a part of our life in Iowa, and certainly not our politics.”

Terrell was asked if the group is speaking out now because a poll has showed the vote on the judges is almost even. Terrell says this issue is beyond the gay marriage issue, although that is the catalyst of Iowa for Freedom. “But retaining judges or not retaining judges is not about one single decision, and so it’s really not about marriage equality, although for a lot of folks, they certainly are very happy….that the court made that ruling,” Terrell says.

Terrell says they are not telling Iowans how to vote on the issue, but said the Iowa Interfaith Alliance is supportive of “marriage equality” and the Iowa Supreme Court decision on gay marriage.