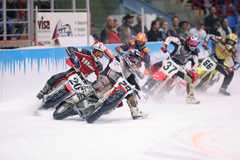 This is Super Bowl weekend for people who’re into the extreme sport of ice racing. Motorcycles and four-wheel all-terrain vehicles will sprint around a hockey-rink sized track inside Wells Fargo Arena in Des Moines.

Kevin Veon  of Stuart is one of the Iowans who will compete on an A-T-V in the 35th annual World Championship Ice Racing Series.

“It’s a two-wheel drive with very minimal rules except you have to be 50-inches wide and you have to have a working tether cord which is a kill cord so if you fall off the machine, it’ll kill the engine,” Veon says. “You also have to have a motor that came out of either a four-wheeler or motorcycle of some sort.”

Veon is 27-years-old and this will be his third championship. Metal screws by the dozens are drilled into the knobs on the specialized rubber tires to provide traction on the ice. Since it’s still too warm for racing on any frozen lakes in Iowa, Veon says he’ll be going into this weekend’s race without having done any recent laps on ice. 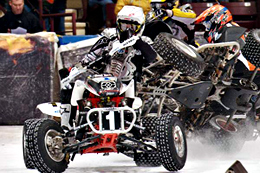 Ice racers will be in Des Moines for the championship series.

“There’s no practice,” Veon says. “A lot of these guys that race this tour race on dirt during the summertime, but the big thing is, it’s just about who’s the bravest when it comes to the race. There’s no hot laps. There’s no practice before the race. It’s just going up to the line and when the green flag goes, you go.”

Veon, who’s an Iowa State trooper in his day job, says ice racing is a thrill — for the audience and for the racers.

“They say 60 miles an hour in the straights, but that might be a little fast, but it’s pretty fast,” Veon says. “Everything happens so quickly because it’s so many people in a small amount of area. That’s the excitement of it, the adrenaline rush of running side-by-side on such a small course.”

The championships in multiple divisions are Saturday in Des Moines, the first time Iowa’s capitol city has ever hosted the event. Cedar Rapids will host another racing event in the series in January. Learn more about the sport at: “www.icespeedway.com”.