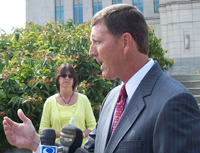 The leader of a successful campaign to oust three Iowa Supreme Court justices says the four justices who remain on the court should consider stepping down. Bob Vander Plaats of Sioux City, the leader of Iowa for Freedom, says he is not asking for immediate resignations.

“But I do believe those four justices do need to think about the message that was sent on November 2, and I believe that they fully realize that if they would have been on that ballot along with their three other peers that they would have been voted off too,” Vander Plaats says, “so as the appointment process takes place, I believe they need to take a look at a timeline and see if that’s something that they would choose to do, is to step down to make sure that they honor the court and they don’t disrupt the court proceedings by not having a quorum.”

Vander Plaats says it does not matter that the remaining justices were not on the ballot.  Very few Iowans know the justice’s names or know them personally, he says — even the justices who were voted off.  But Vander Plaats says he believes voters held the whole court accountable for the opinion on gay marriage because the court was “activist in nature”

“They stepped out of their judicial boundaries and tried to make law, govern law and amend the constitution from the bench,” he says.

Vander Plaats considers the four justices who remain on the court guilty of the same “activism” because they were part of the court’s unanimous 2009 ruling which paved the way for gay marriage in Iowa.

“The former high school principal in me says, if seven kids are guilty of the same violation of the student handbook, but only three were there at the scene when you found them, you still try to hold the other four accountable,” Vander Plaats says.

Vander Plaats ran for governor in 2002, 2006 and 2010, running as the Republican Party’s lieutenant governor nominee in 2006 and losing this past June’s Republican Party Primary to Terry Branstad by about eight point.  Vander Plaats says the people of Iowa in this year’s General Election have also sent a message to the other two branches of government by giving the Iowa House a Republican majority and electing Republican Terry Branstad as governor. Vander Plaats, in the week before the General Election, argued the people of Iowa want the legislature and new governor to take action on the gay marriage issue.  He has even suggested Branstad embrace the idea of issuing an executive order to ban gay marriage in Iowa until there’s a statewide vote on a constitutional amendment declaring the only legal marriages in Iowa are between a man and a woman.

“I think they’re going to expect leadership out of the legislature to make a move on restoring marriage to one man, one woman marriage,” Vander Plaats says.

An executive order would be a short term step, according to Vander Plaats, but he says ultimately Iowans expect the legislature and governor-elect to take action to “restore a true separation of powers so that we have the integrity of the government the way the constitution intended.”

Vander Plaats took up the effort to oust the judges after losing the Republican primary for governor.  He is joining the Iowa Family Policy Center, one of the groups that has fought against gay marriage in Iowa.  Vander Plaats, however, won’t reveal his role with that organization until later this month. Vander Plaats says he has told people he wants to “stay in the battle to fight for the family and promote the family as well as for liberty,” and he says he’ll reveal all the details of his involvement with the Iowa Family Policy Center on November 21.

Former Arkansas Governor Mike Huckabee is due in Iowa that day to headline an Iowa Family Policy Center event at a church in Des Moines.