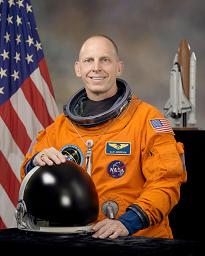 The countdown clock is winding down on America’s space shuttle program, but astronaut Clay Anderson says he isn’t giving up on space. Anderson, the first and only Iowa State University graduate ever to reach orbit, says he hopes as this era of NASA space shuttles comes to an end, another better program will soon be coming along.

“I’m hopeful for the space program,” Anderson says. “The administration has been working to extend the life of the space station to at least 2020.” Anderson traveled aboard a shuttle twice and spent months living aboard the International Space Station. The 51-year-old is hoping for one more assignment that’ll rocket him into space but he isn’t optimistic it will happen.

“I’m not sure, I don’t know if I’ll get another chance to go up,” Anderson says. “The line is very long and with only a few shuttle flights left to go, the ability to send a crew of seven up into space on a regular basis is going to go away pretty soon.” Only two more shuttle missions are planned.

Anderson says for the sake of technology alone, the space program has to continue. He says there are many items we use on a daily basis that were originally developed for space travelers.

“In the Apollo era, as we prepared to go to the moon, portable drills and cell phones took time to develop and those were figured out as we went along the way to go to the moon,” Anderson says. Some other items include smoke detectors, Teflon, satellite TV, pace maker batteries, GPS trackers and even invisible braces for dental care. Anderson says there are endless possibilities.

“As we get ready to go to the moon or to an asteroid or to Mars, aren’t going to show up for a while,” Anderson says. “I don’t know what they will be. I can only hope they will be hugely exciting and beneficial to the folks on the planet.”

He says there’s one question everyone who grew up in the Apollo generation wants to know: Do astronauts still drink Tang? “Absolutely,” he says. “Now we can drink orange smoothie, peach-mango. There are all sorts of great flavors.”

Anderson spent 15 days in space this past April and in 2007, he spent five months living aboard the International Space Station, his first assignment in space. Anderson is a native of Ashland, Nebraska, and now lives in Houston, Texas. He earned a Master of Science degree in aerospace engineering from Iowa State University in 1983.