You are here: Home / Education / Supporters of barn, scheduled for demolition, build following on Facebook 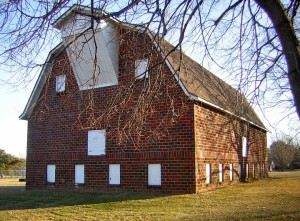 Hundreds of people have joined a Facebook page in support of a 100-plus-year-old barn scheduled for demolition by the West Des Moines School District. Holly Peterson of Des Moines launched the page this week. Within 48 hours, nearly 700 people were followers of the effort.

“I was surprised with how quickly it spread, but I’m not surprised with how many people love the barn,” Peterson said. “I think, we here in Iowa have a sense of pride in our roots and history.” School officials say the 2,200 square foot structure needs to be removed to make way for additional green space as part of a $60 million school expansion project.

The barn’s construction would make it difficult to move to a new location. Barn supporters are hoping to persuade school officials to keep the barn in it’s current location near Valley High School.

The 35-year-old Peterson doesn’t have any direct ties to Valley, but describes herself as a “fan” of Iowa history. “I’ll go on drives out in the country and look at old barns and old schoolhouses,” Peterson said. “I guess, once I found out (the barn) was being torn down, I just felt real disappointed. I started investigating and I’m still not sure every avenue has been explored. I know they’ve done a lot of work to explore moving it.”

Public comments about the barn razing proposal will be taken at the start of the West Des Moines School Board’s next meeting, scheduled for Monday at 7 p.m.

Peterson calls the barn a “symbol of Iowa history” that school kids should recognize as something of importance. “I hope that kids take from it…that history is important to our community. That’s the number one reason why I think we should (save the barn),” Peterson said.

The barn in no longer used by the school district and basically sits empty. Until recently, it was used for storage.