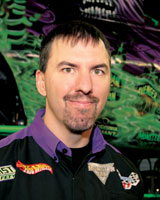 One driver in this weekend’s “Monster Jam” monster truck rally being held in Des Moines is an Iowa native. Rod Schmidt has been all over the world performing in shows behind the wheel of a black-and-green beast known as “Grave Digger.”

“When you’re in there driving, jumping, trying to concentrate on what’s going on in front of you, you’re also trying to get a reaction from the fans, it seems like an awful long time,” Schmidt says. “Your adrenaline is going 120 miles an hour the whole time.”

The 12-foot-tall, ten-thousand-pound vehicle is a 1950 Chevy panel truck with a 540-cubic inch engine. His longest jump to date is 25 cars and Schmidt loves doing what he calls “sky wheelies.”

He says the truck’s monster tires stand more than five-feet tall — all the better for bouncing over big obstacles like piles of wrecked cars.

“They’re 66-inches tall,” Schmidt says. “The tires weigh about 900 pounds a piece. The new tires we’re coming out with are about 600 pounds a piece, which is quite a big savings of weight.”

Schmidt is driving his monster truck in events all over the U-S, Canada, South America, Australia and Europe. In this weekend’s events, he says he may be sharing the arena with a second monster truck.

“You start on each side of the stadium and make two full laps around, jumping cars and dirt hills,” Schmidt says. “My favorite is the freestyle competition when you go against the judges and you go out there for 60 or 90 seconds and just tear the place up, do what you can to impress the fans.”

Schmidt and Grave Digger are on the road three to four months out of the year, while his other jobs include being on a motorcycle stunt team and assembling RVs at the Winnebago factory in Charles City.

There are two shows today t Wells Fargo Arena in Des Moines — at 2 and 7:30 PM. For information, visit: www.iowaeventscenter.com.