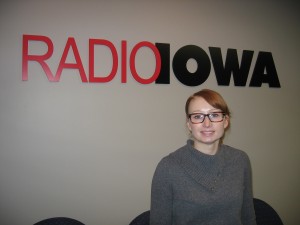 This week, several Iowans are involved in one of the biggest music industry events of the year taking place in Austin, Texas. The South by Southwest (SxSW) Music Conference features hundreds of musical acts from around the globe.

A handful of artists from Iowa are playing showcases at SxSW including the Ames-based band Poison Control Center and Iowa City’s Diplomats of Solid Sound. Hillary Brown of Des Moines, meanwhile, will be leading a panel discussion at SxSW titled “Landing a Music Career in Flyover Country.” “The goal behind our panel is to…explore opportunities for artists who don’t want to go to the saturated entertainment markets of Los Angeles, New York or Nashville,” Brown said. “You can find success in your own back yard.”

Brown co-owns an entertainment marketing company called On Pitch with Jill Haverkamp. The 31-year-old Brown moved back to Iowa in 2008 after spending several years in Los Angeles. “It would have been a lot harder for Jill and I to start a music marketing company in L.A. where there are so many and it’s already a little over-saturated,” Brown said. “Whereas, right here (in Iowa), there was a huge opportunity and people were kind of hungry for this resource.”

Both Brown and Haverkamp have been heavily involved in promoting the annual 80/35 Music Festival in Des Moines. Their panel discussion at SxSW is scheduled for today at 3:30 p.m. at the Austin Convention Center.

The panelists include Shawn Crahan of the Iowa-based metal band Slipknot, Amedeo Rossi of the Des Moines Music Coalition and Sean Moeller – owner of Daytrotter, a studio and online music site based in the Quad Cities.