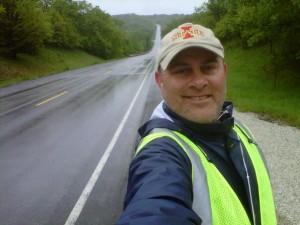 A film that documents one man’s walk across Iowa will make its debut tonight. Steve Muntz titled his film “14 Days of Iowa” after spending two weeks last spring traveling by foot from Sioux City to Dubuque.

The broadcasting professor at Marshalltown Community College says he was surprised by the kindness of strangers who stopped to offer him a ride or a place to stay. “I did some calling ahead of time to find out who might be able to host me during my walk, but in many cases, I was able to stay with people who really didn’t know who I was,” Muntz said.

Dogs weren’t quite as hospitable. By his count, Muntz says he was chased by more than 100 canines. “You know, 90-percent of them were harmless. They’d come out and just sniff me, bark at me and protect their territory. But, there were some interesting encounters with farm dogs,” Muntz said.

The two-week long walk covered 320 miles, mostly along Highway 20. Muntz says he walked a total of 90 hours, traveling roughly 23 miles a day. He shot the footage himself with a small handheld camera.

The 52-minute long documentary will be get its first screening today at 7 p.m. at the Orpheum Theater in Marshalltown. Muntz is hoping to post the entire film online sometime soon.