You are here: Home / Education / Governor talks issues with Board of Education 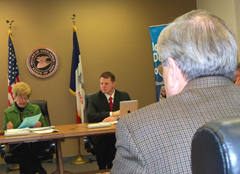 Governor Terry Branstad and Lieutenant Governor Kim Reynolds spent an hour with the Board of Education Thursday.

Board members questioned Branstad on many issues, and shook their head in agreement as he talked about many of them.

Board president Rosie Hussey of Clear Lake  told Branstad her daughter and son-in-law were both teachers with three children and were concerned they would not be able to send their children to preschool if it was no longer free.

Branstad’s replied that under his plan, a family of four making $66,000 a year would have to pay $133-a-month for preschool. He says he doesn’t think it’s an insurmountable amount.

“And let me tell you what, families have been doing that for a long time. And many have made bigger sacrifices than that,” Branstad says. He says many have made bigger sacrifices by homeschooling their kids or sending them to a private school and paying tuition. Branstad says he knows from personal experience when he sent his kids to a Catholic school and they were also paying for his wife to go to community college.

Branstad says the current budget can’t sustain free preschool for everyone. When it comes to school standards, Branstad says state standards are important to making Iowa tops in the nation in education, while still giving local districts control. Branstad says we need to have very clear and understandable state standards with a fair and uniform assessment system that measures student achievement at every level. He says we also need to allow local districts to develop their own standards to get the best student achievement.

Branstad says part of making schools better is working to make administrators better. He says the state also needs to involve teachers in evaluating each other, so it is not just the principal making the evaluations, but it will include colleagues that can help mentor each other to be better and give constructive criticism. 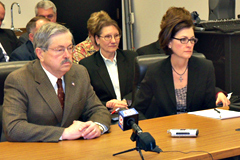 Governor Branstad and Lt. Governor Kim Reynolds at the Board of Education meeting.

Branstad says his top goal is to get everyone involved, as that’s the best way to change the education system. “And I also know that it won’t be easy, because if we’re really gonna do this, it’s gonna go against the way that people have always done things,” Branstad says.

He says as a life-long Iowan who loves the state and appreciates the “great education” he got, and the “great teachers that influenced me,” he knows they have to do “find better ways to do things for the future.”

He also told the board that people are ready for a change. “I think the timing is good for this, because I think there is a realization that we do need to do things differently,” Branstad says.

It was Branstad’s first formal meeting with the board since he took office in January. He said he would like to meet with the board periodically as education issues move forward. The governor is holding an education summit later this year where many of the issues will be discussed.