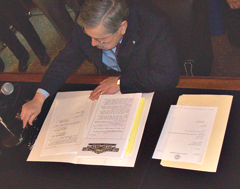 “I do think that we can have some pride in the fact that Iowa has a system for reapportionment that is fair and really gives the people an opportunity to choose their congressmen and their representatives and senators in a competitive system that isn’t designed to skew it in favor of one party or the other,” Branstad said.

Iowa uses a unique system to draw the lines for legislative and congressional districts. Once the new Census data is available, staff in the non-partisan Legislative Services Agency draft the plan — with no regard to where incumbent lawmakers live or whether a district may be favorable to one party or the other.

Last Thursday, the Iowa House and Senate overwhelmingly embraced the first set of maps drawn up by the Legislative Services Agency.  The governor says because of this system, Iowa’s districts for congress and for state House and Senate races tend to be competitive and he predicts a vast majority of the districts could be won by a candidate from either party. 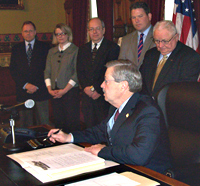 In nearly every other state, the party in power at the statehouse uses the process of redistricting to draw new districts that are most favorable to their party.

“There are very few competitive congressional districts in the United States and there are a lot of people that think the extreme partisanship we see at the national level is somewhat caused by the partisan apportionment that goes on,” Branstad said, “especially in big states.”

Other states gained population more dramatically than Iowa did in the past 10 years, so — as a result of the 2010 Census — Iowa lost one of its five congressional seats.

Branstad jokes realtors are the big winners in this process, as two of Iowa’s five congressmen have said they’re moving into another district rather than face a primary against an incumbent of their own party. Republican Congressman Tom Latham announced last Friday he’ll move into the new third district, setting up a General Election showdown against Democratic Congressman Leonard Boswell of Des Moines.

Democratic Congressmen Bruce Braley of Waterloo and Dave Loebsack of Mount Vernon live in the new first district, but Loebsack intends to move to Johnson County, which is in the new second district.  National publications report former Iowa First Lady Christie Vilsack plans to move to Ames to challenge Republican Congressman Steve King, but a spokesman for Vilsack has not responded to Radio Iowa’s phone or email messages.