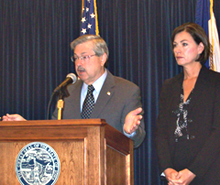 Republican Governor Terry Branstad used his weekly news conference to send a message to the Republicans who intend to run for president in 2012.

“I just want to make it clear that we’re wide open for all the candidates,” Branstad said.

Iowa’s Caucuses are the first contest in the presidential selection process, but critics charge the state’s Republican Party is so dominated by social conservatives that more moderate Republicans have no chance to win.

Branstad suggests Iowans are primarily focused on financial concerns, and Branstad points to his own successful 2010 campaign as an example of how a candidate who doesn’t focus on social issues can win.

“Iowa voters are very independent-thinking people,” Branstad said. “…That’s historically been the case and I think it will be the case again (in 2012).”

Des Moines lawyer Doug Gross, the Republican Party’s 2002 nominee for governor and a former aide to Branstad, sees an opening for a “mainstream” Republican in Iowa. But Gross said it’s because former Arkansas Governor Mike Huckabee announced this past weekend that he won’t run in 2012.

“Huckabee getting out means you’re going to have multiple social conservatives in the race. As a result of that, they’ll divide up a lot of the Caucus vote and there’ll be an opportunity for a mainstream Republican to come in and do surprisingly well here,” Gross said during a telephone interview with Radio Iowa. “If I were Mitt Romney and I wanted to be the nominee for president, I’d play in Iowa this time because if you win in Iowa this time, you have a chance to win the nomination.”

Gross supported Romney in 2008 and warns candidates who want to be “all in” for the Iowa Caucuses, must start campaigning in earnest here by June 15th. Former House Speaker Newt Gingrich is launching a 17-city tour of Iowa today. Former Minnesota Governor Tim Pawlenty campaigned in Iowa last weekend.

“Pawlenty, I think, is playing this ‘right’ right now,” Gross said. “Pawlenty is running a sort of mainstream campaign and he’s the only one doing it and as a result of that could finish surprisingly well in the Iowa Caucuses unless somebody else gets in.”

John McCain won the G.O.P.’s 2008 presidential nomination, but he chose not to compete in the Iowa Republican Party’s Straw Poll in August of 2007 and campaigned little in Iowa before the Caucuses. Branstad faults McCain’s strategy.

“I think that was a mistake,” Branstad said. “…I wouldn’t look to his campaign as the ideal in terms of how to run a successful, winning campaign and be elected president.”

Branstad calls Iowa a “full-spectrum state” with voters who expects 2012 candidates to “articulate a message of job creation and slashing the federal debt.”

In addition to Gingrich, another likely Republican presidential candidate is campaigning in Iowa this week. Former Godfather’s Pizza C.E.O. Herman Cain is campaign in Des Moines today and tomorrow he’s scheduled to be in Marshalltown and Cedar Rapids.