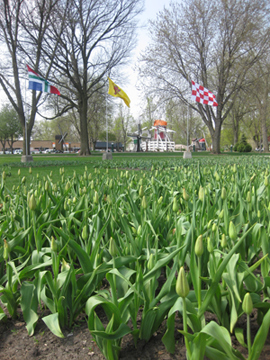 Saras says it has actually helped the tulips, as the damp wet weather is similar to Holland where the tulips originate.

She says it allowed the tulips to develop right on time for the festival. Saras says there are events today through Sunday.

She says things start in the morning with attractions at the museum, a quilt show and flower show. The live performances with children and adult Dutch dancers start in the afternoon, and there’s street scrubbing and a parade at two p.m. The central Iowa town of Pella held its tulip festival a couple of weeks ago.

Saras says there are many similarities between the two. “We do highlight some of the same things, Pella’s festival is a little bit more commercialized than ours is just because they have kind of a bigger town and more manufacturers and all that kind of stuff to support them,” Saras says, “so ours is maybe a little bit more homespun than theirs is…but they’re both great festivals.”

Saras says the city of around 5,800 will see thousands of visitors during the festival. She says they estimate there are 100,000 people who attend the event during the three days. You can find out more about the Orange City Tulip Festival on-line at: wwwoctulipfestival.com.