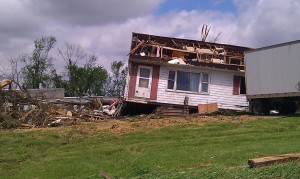 Tornado damage near Chester in Howard County (photo from NWS in LaCrosse, WI)

National Weather Service teams have confirmed the damage from storms in eastern Iowa Sunday was caused by four tornadoes.

Meteorologist John Haasi is with the NWS office in the Quad Cities, which confirmed two tornado touchdowns in Iowa County. He says an EF2 tornado, with winds of 120 miles per hour, damaged homes, buildings and trees over a six-mile long path in a rural area between Ladora and Marengo.

A weaker, EF0 tornado hit an area between Millersburg and Parnell. “The only damage that was noted (from the EF0) was some power lines blown down, some tree damage and a shed was flipped over,” Haasi said.

Another EF2 tornado damaged homes and destroyed some outbuildings in Howard County. Wind speeds with that storm may’ve peaked at 135 miles per hour just south of Chester.

Another NWS team is surveying damage today from a fourth tornado in Fayette County that flipped an R-V and destroyed grain bins and other farm buildings near West Union and Randalia.

There have been no reports of injuries from the storms.