You are here: Home / Education / State treasurer on the road to defend fellow Democrats in legislature 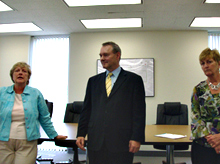 State Treasurer Michael Fitzgerald has gone on the road this week to — in his words “set the record straight” — and counter Republican charges that the state’s finances are in peril. Fitzgerald, a Democrat, says the state is in good financial shape.

“You know we’ve all been hearing a lot of what I would consider distortions, distractions from the governor saying that the State of Iowa may be in a deficit or financially we’re going over a cliff,” Fitzgerald says. “That just ain’t so.”

Governor Branstad, a Republican, has said he was elected to “clean up the mess” the former Democratic governor left behind and he’s rebuked Democrats who control the Iowa Senate for failing to realize he’s the “new sheriff in town.” Fitzgerald says it’s time for Branstad to “roll up his sleeves” and quit relying on his staff to negotiate a budget deal with the legislature.

“Governor Branstad, sit down with the legislative leaders and work out this budget,” Fitzgerald says. “The money’s there. It’s important to this state on a lot of levels.”

Democrats are pressing to spend more on K-through-12 public schools, for example, but Republicans have proposed a “status quo” spending level for schools. Fitzgerald says he’s mystified by the GOP’s miserly approach.

“We have a balanced budget, a surplus. We have the money to come together on agreement. But just how stubbord — in my opinion– does the governor want to be?” Fitzgerald asked during an appearance in Mason City. “But also I want people to know it’s starting to cost us and hurt us now every day that goes by because all these organizations can’t plan for the future.”

House Republicans and Branstad say they will not agree to spend more than $5.99 billion in next year’s state budget and if Democrats want to dedicate more money to schools, they should propose cuts in other areas.  House Republicans are in Des Moines today, meeting privately to decide whether to pass one, huge bill next week that would outline the entire state budget plan they’ve developed, plus other GOP-backed proposals which have failed to become law yet this year.  Democrats who control the Senate have already vowed to reject such a bill, dismissing it as a “stitched together…Frankenstein” bill.