Grape growers who produce Iowa-made wines are preparing for the annual arrival of a nasty pest. The Japanese beetle was first spotted in Iowa in 1994. Infestations of the copper-winged insects have since spread to 52 counties, but remain primarily in eastern Iowa.

Mike White, Viticulture Specialist with Iowa State University Extension, says Japanese beetles can devour grape vine foliage. “They usually stay up on top of the canopy and don’t do that much damage,” White said. “But, once you see over five-percent defoliation and they start going lower in the canopy, then you may have to spray.”

Many Iowa vineyards control Japanese beetles with Sevin, a common insecticide. Others have reported some luck with Japanese beetle traps, though White says the traps tend to simply lure more beetles. Applying insecticide, White notes, is both costly and time consuming.

“That insecticide will typically provide control for five to seven days,” White said. So, insecticide applications are needed once a week through mid-August when the beetles begin to lay eggs. Japanese beetles aren’t just a problem in vineyards. They’re known to feast on hundreds of plants and trees. 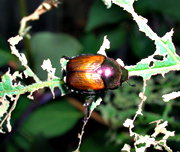 “Quite frankly, they go after everything,” White said. “Rose bushes, my goodness, they’ll come in and completely take every leaf off a rose bush. Linden trees tend to be their first choice, in my experience, after that they start going after grapes.” Iowa has more than 80 licensed wineries with roughly 1,200 acres of vineyards.