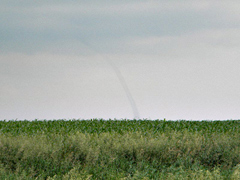 A tornado touched down Sunday afternoon in northern Iowa’s Winnebago County near the town of Rake, though no serious damage or injuries are reported.

Storms this morning brought heavy rain and hail mostly to Iowa’s southern half, with Chariton reporting wind gusts of 62 miles an hour. 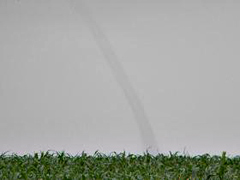 Closer look at Tornado near Rake.

Strong winds tore limbs off trees in Atlantic, with scattered reports of power outages across the region. Craig Cogil, a meteorologist at the National Weather Service, says more foul weather may be on the way.

Cogil says, “We’re really focusing in on a storm system this evening that could bring some widespread severe weather to western Iowa, large hail, damaging winds and even a few tornadoes.”

He says the possibility of tornadoes will be confined to the area west of Interstate 35 to the Missouri border.

Cogil says the threat of thunderstorms will continue into Tuesday, followed by a period of below-normal temperatures. 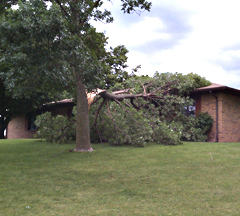 A tree damaged by storms in Atlantic.

Highs mid-week may only be around 70 degrees, quite cool for this time of year. Summer officially arrives at 12:16 P.M. on Tuesday.