You are here: Home / News / Bachmann blames both parties for nation’s problems 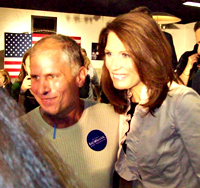 Republican presidential candidate Michele Bachmann “formally” entered the race this morning, with a speech in her hometown of Waterloo, Iowa.

“I stand here in the midst of many friends and many family members to announce formally my candidacy for the president of the United States,” Bachmann said.

The Minnesota congresswoman told supporters she’s not running for “vanity” but to be a “voice” for the American people.

“I think that Americans agree,” Bachmann said. “Our country is in peril today and we have to act with urgency to save it.”

Bachmann, who was born in Waterloo five decades ago, is currently serving her third term as a member of the U.S. House. Bachmann said the 2012 election hinges on “big issues” rather than “petty”politics.

“We’ve begun another campaign season and it almost seems like the last one only recently ended, but through the rancor of a campaign, let us always remember there’s always so much more that unites us as a nation than divides us because our problems don’t have an identity of party,” Bachmann said. “They’re problems that were created by both parties.”

Bachmann repeated her campaign refrain, that Barack Obama will be a “one term president” and she promised to reign in the “corruption and waste” in the federal government.

Bachmann’s event was held outdoors at the historic Snowden House in downtown Waterloo.