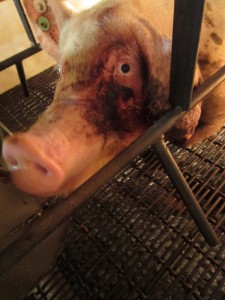 The video clips show piglets being thrown, their tails being cut off without anesthesia and pigs being kept in small restrictive cages. “While much of this cruelty would shock and horrify the average American, many of these conditions are considered standard and acceptable by the pork industry and currently deemed legal in the state of Iowa,” Runkle said.

He’s calling on the pork industry to change it’s accepted procedures. “At Iowa Select, we see that these animals are treated as little more than meat producing machines. But in reality, farm animals are every bit as sensitive and intelligent as the dogs and cats so many of us know and love. These animals have the ability and capacity to suffer pain, fear and loneliness,” Runkle said. Pork from Iowa Select is distributed to several grocery stores including Safeway, Costco and Hy-Vee.

Dr. Howard Hill is a senior veterinarian with Iowa Select Farms, which is based in Iowa Falls. He says everything shown on the video depicts “the exact opposite” of the company’s animal handling and welfare policies. “We’re always disappointed when something like this happens because it reflects poorly on the industry and it’s damaging to other pork producers and the whole pork industry,” Hill told Radio Iowa. “(Iowa Select Farms) has a zero tolerance policy…if it’s proven anyone has abused animals, they would be terminated immediately.”

Iowa Select Farms has launched an “independent investigation” into the alleged abuse. Dr. Anna Johnson, an animal behavior researcher at Iowa State University, has been retained by the company for that review. “She’s just in the preliminary process of evaluating the tape,” Hill said. “She’ll be spending a considerable amount of time on the farm interviewing the employees. She will prepare a report that we will then act on.”

Mercy for Animal’s undercover investigation would be illegal under a proposed bill that was approved by the Iowa House this session. If it became law, it would be considered a felony to take undercover video or pictures of livestock operations in Iowa.

(photo from Mercy for Animals)