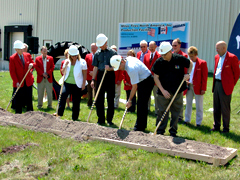 Groundbreaking for the Mitas tire company in Charles City.

One of Europe’s leading manufacturers of agricultural tires held a ground breaking ceremony Thursday afternoon for their new plant in Charles City.

Czech Republic-based Mitas  Tires announced last fall they were purchasing and renovating a former Winnebago Industries manufacturing facility for the construction and distribution of agricultural and industrial tires under the Mitas and Continental brands.

It’s a $44-million project that’s expected to create more than 200 jobs for the area. Mitas international human relations director, Ralph Kellenberger, says they looked throughout the United States and decided Iowa was the best place for their operations.

He says they chose a few states, with Iowa being at the top of their list. They then found the right fit for the manufacturing operation in Charles City. Kellenberger says the Charles City site is the right place to distribute tires to their main customers. He says a lot of the tractor producers are within a few hours drive of Charles City, which he says is important.

Kellenberger says local and state officials have been very supportive of the company. Charles City’s economic development director, Tim Fox, says the company is the right fit for Charles City, in the heart of ag country.

Fox says the plant’s location just off of the Avenue of the Saints was vital in Mitas coming to Charles City as it makes it easy to bring labor into Charles City, as well as move the product out.

The factory is scheduled to begin production by next spring.