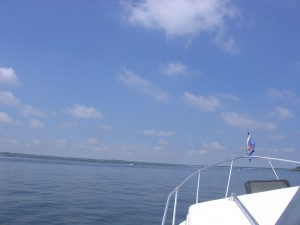 The Iowa Department of Natural Resources is reminding boaters to pay attention to their surroundings after a scary moment on the water for a teenager in Dubuque County.

On Saturday evening, the 14-year-old girl was floating on an inner-tube at a Mississippi River beach when a boat backed into her. The propeller cut her leg and she was rushed to the hospital to be treated for the injury.

Dale Barton from Sherill says he was walking along the beach when he heard the girl scream. “She was just cut up on the outside of her leg from what I could see,” Barton said. “She was really lucky I think. It could have been much worse.”

The conservation officer says the heat wave sweeping the Midwest maybe partly to blame with more people flocking to local beaches, lakes and rivers to cool off.

Barton, who’s an experienced boater, says this just means people need to be more cautious. “It’s when you get in close quarters, when you’re tubing and skiing, that’s when you got to be careful,” Barton said. “A lot of people get caught up in the moment, they’re talking to their friends in the boat or listening to the stereo and they’re not watching what’s going on behind or in front of them.”

Numbers from The Army Corps of Engineers also show this has been a dangerous year on the water. Last May, the Corps reported 39 deaths on their properties nationwide. This year, 57 people have died at Corps operated lakes. The Corps has three lakes in Iowa: Saylorville near Des Moines, Lake Red Rock in Pella and Coralville Lake in Iowa City.