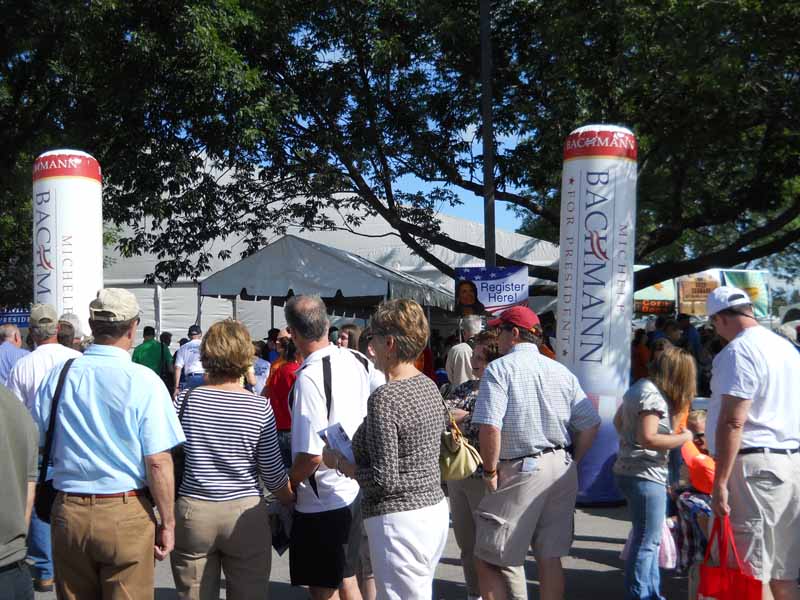 “All of the greatness, all of the energy, all that we need to do to take the country back in 2012 is right here in this room in Ames, Iowa,” Bachmann, a Minnesota congresswoman, said earlier today in a speech inside Hilton Coliseum in Ames. “We are going to do it together, and take it back.”

Pawlenty called his GOP competitors “wonderful people” during his speech today and reserved his harshest attack for the Democratic president.

“We know what America needs, but unfortunately Barack Obama has absolutely no clue,” Pawlenty said. “He is like a manure spreader in a wind storm.” 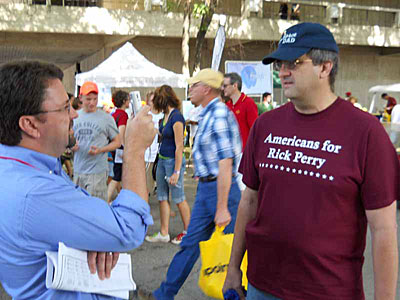 “I think Texas is one of the best-positioned states in the union and I think Rick can bring that experience to Washington,” said Noble, who lived in Texas for 13 years. “I think Rick’s very confident, a very long-term governor. He’s proven his leadership.”

Perry today went to South Carolina to make it clear he’s contesting for the GOP’s 2012 presidential nomination. Marla Carlson of Waterloo voted for Bachmann in the Straw Poll, and she’s not thrilled by Perry’s decisions, particularly his plan to show up in her city on Sunday to speak at a Black Hawk County GOP fundraiser.

“I think he should have waited until after all this to make his announcements,” Carlson said.

Mitt Romney, the winner of the 2007 Iowa Straw Poll, is choosing to skip all Straw Polls in his second bid for the White House.  State party officials put Romney’s name on the Straw Poll ballot, along with candidates Jon Huntsman and Newt Gingrich, and Romney got 567 votes, finishing in seventh place.  John Armon of Cedar Rapids said he voted for the former Massachusetts governor because Romney “gets it.”

Gingrich received 385 votes. Huntsman received 69 and Thaddeus McCotter, the Michigan congressman who entered the race in July and paid $15,000 to rent Straw Poll party space from the Iowa GOP, finished last with 35 votes.

Traffic was backed up mid-morning as Straw Poll participants made their way into the parking lots between Hilton Coliseum and Cyclone Stadium in Ames. According to the final tally, 16,892 Straw Poll votes were cast today.

“This is just a terrific gathering of grassroots people,” says Bill Schickel, co-chair of the Iowa GOP. “For people old enough to remember, I call this the political ‘Woodstock’ of America.”

Schickel, though, jokes today’s crowd was more “clean cut” than those who gathered for the infamous outdoor concert.