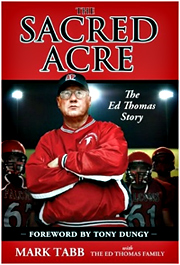 A new book will be released today on the life and legacy of Ed Thomas. The Aplington Parkersburg High School football coach helped his community rebound from a devastating tornado in May of 2008, and he was murdered a year later.

Author Mark Tabb wrote the book, “The Sacred Acre: The Ed Thomas Story.” “People who have never even heard of Parkersburg, through this book, would come to know Ed Thomas,” Tabb says.

“They would see his character and by discovering how he lived his life, the reader would be challenged in the way they approach life and their priorities as well. The family really wanted that message to come out.” Thomas was shot to death by a former student in the school’s weight room in 2009.

Tabb says he compiled the book based upon interviews with more than 80 people, including family members, former players and members of the community. “One message I heard over and over was how the tragedy of losing Ed Thomas was greater than the tragedy of the tornado and that it was taking longer to recover,” Tabb says. “I saw how the town has, it’s not that they’ve moved on, but they’re building on this legacy that Ed left behind.”

Tabb said a special event is set for Friday night at Aplington Parkersburg High School to celebrate the new book — and to remember the man the book is about. He notes, the ceremonies will conclude, appropriately, with a football game. “Ed Thomas would not want all of this fuss being made over him and he would probably hate this event that’s taking place and say ‘Let’s just get on with the game,'” Tabb says.

“We’re not going to just get on with the game. There’s going to be dignitaries there to speak to honor his legacy and the book will be launched at that event.” The book goes on sale today on the Amazon and Barnes and Noble websites. You can also order a copy through the author’s website: www.marktabb.com