You are here: Home / Human Interest / Iowans recognized for heroism at the Iowa State Fair 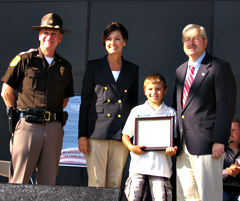 Twenty-six Iowans were honored at the Iowa State Fair this morning for their heroic acts that, in many cases, helped save lives.

The youngest recipient of a Governor’s Outstanding Service Award went to 8-year-old James Wenndt  of Lacona.

He was just six in October of 2009 when he was with his father who was climbing a tree to move a deer stand.  Forty-four-year-old Craig Wenndt, fell 17 feet to the ground when the stand broke.

“My foot broke off my leg and I had James go run for help,” Wenndt said. “He went for help and that’s what saved my leg. If he wouldn’t have been there, I would’ve bled out.” James remembers running as fast as he could to a neighbor’s house. 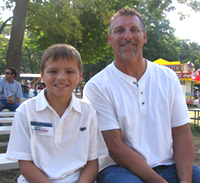 “Everybody said I ran (the length of) two football fields to go to a friend’s house and get help,” James said. The neighbor called 9-1-1.

Craig Wenndt broke his leg in nine places. The ambulance had to stop twice to control the bleeding on the way to the hospital. Wenndt spent 22 days in the hospital before he was released.

“And H1N1 was big, so the hospital wouldn’t let my kids come up and see me,” Wenndt said. “So, it was a long time in the hospital to lay there with just a broken leg.” The leg is now completely healed.

James is getting ready to start third grade soon at Southeast Warren Elementary School. “I’m very proud of him,” Wenndt said of his son James.

Learn more about the other Iowans who were recognized for their lifesaving efforts by visiting the Department of Public Safety website: www.dps.state.ia.us/commis/pib/Awards/honorees2011.shtml.

Listen to Pat Curtis’ entire inteview with the Wenndts: Wendt 2:06