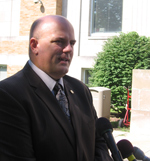 Autopsy results have confirmed a body found inside a burned home in Warren County is that of the home’s owner, 79-year-old Bill “James” Wood.

The fire destroyed the home near Norwalk on the night of July 30th. Iowa D.C.I. special agent Mike Motsinger says they also now know Wood died of multiple gunshot wounds and the death is a homicide.

There’s still no word on the whereabouts of Wood’s 72-year-old wife Kay. “At this time, we still remain hopeful that Kay will still be found and she’ll be okay,” Motsinger said. “We’re asking the general public for any and all information they might have about the whereabouts of the Woods between that Saturday and Sunday.” 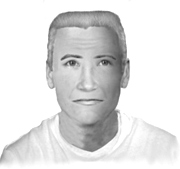 The D.C.I. released this sketch of a person sought in the Warren County fatal fire case.

The Wood’s truck was found the day after the fire in Kansas City. On August 9th, the D.C.I. released a sketch of a man who was seen with the truck. He’s called a “person of interest” in the case.

Motsinger said investigators have yet to identify the man or his connection to Bill and Kay Wood. Motsinger said it’s unlikely Kay Wood was also in the home at the time of the fire and her body was destroyed.

“In talking with the state fire marshal’s office, they don’t believe so. My understanding is it has to burn very hot for a very long time to totally consume a body,” Motsinger said. Investigators have not identified any suspects and Motsinger refused to speculate on a possible motive. He admits the case, for the most part, remains a mystery.

“There are several theories. There could be one person responsible, there could be two people, we just don’t know. At this time, we’re basically keeping any option open and we’re following up on all the leads as they come in,” Motsinger said.

The man seen with the Wood’s truck, who authorities are still looking for, is described as white, perhaps between his late 40s and early 60s, 6’2″ to 6’6″ with a slender build and short grey-to-white hair.

Motsinger said there’s no indication the public is in danger, although a killer is at large. He says they do ask the public to be vigilent and be aware of their surroundings as they normally would.