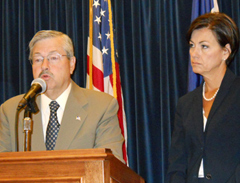 Several residents of the Council Bluffs area had to be rescued this morning due to torrential rain. The governor says one woman was rescued with little time to spare, as her home collapsed shortly afterwards.

“It is a serious situation, but I also want you to know it’s not a levee breach,” Branstad says. “That has held, but they got four inches of rain and there’s been flash-flooding in the community.”

“The National Guard is down there with high-water vehicles and has evacuated a number of people,” Branstad says. “They also rescued, I think, 24 children and a bus driver from a bus that also got stranded in the flooding area, so it’s a very critical situation.”

The school bus had stalled in about four-feet of water, near downtown Council Bluffs. City officials report heavy flooding on the west side of Council Bluffs, with many homeowners reporting flooded basements.