You are here: Home / Fires/Accidents/Disasters / Stunt pilot dies in crash at air show 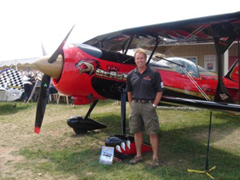 An aerobatic stunt pilot who grew up in western Iowa died over the weekend during a crash at an air show in Missouri.

Fifty-year old Bryan Jensen, of Ponte Vedra, Florida, and a native of Atlantic, died when the custom built red biplane he was flying failed to pull out of a dive.

The plane, which had been performing loops and other aerobatic maneuvers, spun into the ground during the Kansas City Aviation Expo Air Show, in Kansas City, Missouri, at around 1:45 P.M., Saturday.

Jensen was an experienced commercial and private pilot, with more than 23,000 hours under his belt.

According to his website, he grew up on a farm near Atlantic, and took his first flying lesson when he was 13. Jensen, who graduated from the Atlantic High School in 1979, flew jumbo jets for Delta Airlines, and had been a stunt pilot for the past 15-years.

The air show immediately closed following the crash, but the action resumed Sunday. Officials with the Federal Aviation Administration and the National Transportation Safety Board are investigating the accident.

Services for Bryan Jensen are currently pending at the Hockenberry Family Care Funeral Home, in Atlantic.