You are here: Home / Human Interest / Plaza in Clear Lake honors rock-and-roll stars who died in 1959 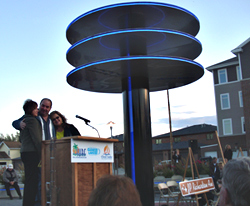 The son of “The Big Bopper” J.P. Richardson and two of Ritchie Valens’ sisters were in Clear Lake on Thursday afternoon for the opening of a new plaza honoring the three rock-and-roll stars who died in a plane crash after performing at the Surf Ballroom in 1959.

The Three Stars Plaza sits about a half block west of the Surf.

Two streets surrounding the Surf were also renamed after Valens and Richardson to join Buddy Holly Place in triangulating the ballroom property. Valens’ sister, Connie Lemos, says it’s great honor to all three musicians. She says it’s quite a tribute for people now to be able to drive down Ritchie Valens Drive and J. P. Richardson Avenue and be able to see the new plaza honoring the stars.

The park’s centerpiece is an art feature that depicts a record spindle with three records stacked on top, with the names of Valens, the Big Bopper and Buddy Holly inscribed. At night, the art feature and the entire plaza are encircled with blue neon. Lemos says she continues to be surprised that the people of Clear Lake would continue to honor her brother.

She says she’s amazed by Clear Lake’s effort to bring the rockers’ legacy to another level. J.P. Richardson Junior says it’s thrilling what Clear Lake does to recognize his dad, as well as Valens and Holly. He says the stars probably didn’t even spend eight hours in Clear Lake, but 53 years later, it’s great to see the community has never forgotten them.

Richardson also donated a briefcase to the Surf to display, along with its contents. His dad had the case with him at the time of the plane crash.