You are here: Home / News / Undecided voters give Romney a look 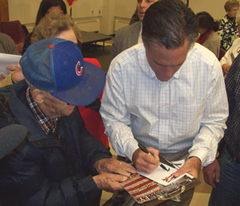 Mitt Romney signs an autograph at an event in Sioux City.

It seems many in the crowd at Republican presidential candidate Mitt Romney’s event this morning in Sioux City could wind up backing Romney in the Iowa Caucuses, but they’re not yet ready to commit.

“We try and see a number of different candidates, but Romney’s one of the candidates I like very much,” Todd Barry said after listening to Romney this morning. “…I feel very strongly the economy and our country is the key issue and I think he’s got a good plan, a very positive plan.”

State Representative Chuck Soderberg, a Republican from Le Mars, endorsed Romney in 2008, but he hasn’t endorsed Romney’s 2012 bid.  So when will Soderberg decide on a candidate?

“I’m not sure,” Soderberg said just before he was invited to sit behind Romney at the event. “Most likely before the Caucuses.”

Soderberg said he’s like many Iowans who have been watching the televised debates and trying to evaluate the candidates.

Alan Lucken of Akron said he likes the “intelligence level” Romney has exhibited during the debates.

Lucken isn’t an undecided voter, though. He’s a Romney supporter.

“He’s got such a strong business record,” Lucken said, “and I think that would surely help him with the economy.”

Former Iowa House Speaker Christopher Rants of Sioux City endorsed Romney’s last bid for the White House.  Rants is no longer in elected office. He’s working as a political consultant — Rants worked for a Michigan congressman who briefly ran for president this summer. During an interview this morning before Romney arrived, Rants said many Iowans were waiting until they knew for sure which candidates were out on the playing field.

“Now that the field is set and the Caucuses are really just a couple of months away, people will start making up their minds,” Rants said, “and they’ll start making them up fast.”

That makes Romney’s visit to Republican-rich northwest Iowa a timely one.  However, Rants also suggested Romney has to step up his ground game here in Iowa.

Romney is holding a roundtable discussion about the economy in Treynor over the noon-hour today. He’ll meet with members of the Chamber of Commerce in Council Bluffs late this afternoon.