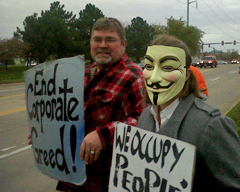 Walker was the keynote speaker at a Heritage Foundation event held in a hotel ballroom. The protesters stood along the sidewalk outside, getting supportive honks from passing motorists. Iowa Federation of Labor president Ken Sager was among the first to arrive, shortly after five.

“Governor Walker needs to understand that we recognize what he’s done to working people and the middle class in Wisconsin and we don’t need that here in Iowa,” Sager said. “We don’t need to destroy jobs. We need to create jobs.”

“We’re losing ground on things that we fought for for 40, 50 years,” she said, “and it’s going to be a different country if we don’t get it turned around.”

Barbara Sorlie of Ankeny, Iowa, grew up in Milwaukee, Wisconsin and her great-grandfather was the first president of the American Federation of Labor in Wisconsin.

“I love Wisconsin. It’s always been known as a progressive state and very good to their workers, until Scott Walker got in and his crew, funded by the Koch brothers, and he’s taken a beautifully progressive state right down the tubes and I hope he’s recalled,” Sorlie said. “I want to stand with the workers.” 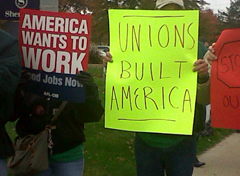 Sorlie made a small sign for the sidewalk picket. “It says: ‘Walker, Wanted in Wisconsin for Recall. Go Home!” Sorlie said, laughing.

Mary Caponi of Des Moines held a sign and waved at passing motorists who honked.

“My son is a student in Wisconsin and a resident there and it’s his birthday and he asked me to come, for a birthday present, to protest Governor Walker’s visit,” Caponi said, “so that’s why I’m here.”

Jeremy Richards, an “Occupy Des Moines” protester, expects Walker will be the subject of protests wherever he goes.

“There are so many things that Scott Walker has done to show he does not care about the people,” Richards said.

Reporters were not allowed to cover Walker’s speech. West Des Moines Police were on site to keep all but paying guests and banquet-goers off the hotel property. Walker’s office released a written statement through the Wisconsin Republican Party, saying Walker was in Iowa to tout the “successes” of his “recently enacted budget reforms.”