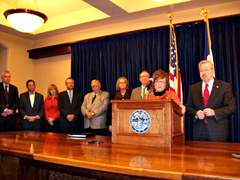 Iowa Economic Development Authority director Debi Durham speaks to media as the governor and IPEP Board look on.

Some of the state’s captains of industry have agreed to serve on two new boards which will steer state government economic development policy.

Governor Branstad says the executives will help develop a “comprehensive economic development strategy” for the state, including marketing advice and tips about emerging markets around the globe.

“This is a new day for economic development in Iowa,” Branstad says. “I think it shows we are bringing together the best of the private sector.”

During the 2010 campaign Branstad called for creating a new public-private partnership to replace the Iowa Department of Economic Development and legislators agreed to the idea this past spring.

Executives from Rockwell Collins, Pioneer and Principal are among the 18 Iowa business leaders on the new “Iowa Partnership for Economic Progress” board and the “Iowa Innovation Corporation” board.  Principal C.E.O. Larry Zimpleman says Iowa’s favorable regulatory climate gives Iowa-based financial services businesses the potential to expand into foreign markets.

“It’s interesting today, as many of you know, is the day that the seven-billionth person is born on the planet,” He says. “We have an exploding middle-income class all over the world who are going to want the same sort of financial products and services, frankly the same consumer products and services, that all of us here in the United States have grown up with, so there is a big opportunity for Iowa companies in markets like Brazil and China and southeast Asia.”

The Iowa Economic Development Authority serves as the over-arching operating structure for the new public-private agency and a new board of directors for that authority has met once and handed out state grants for businesses that promise to create new jobs in Iowa.  Branstad says business secrets from the participating executives and the businesses state officials are trying to lure to the state will be handled “carefully.”

AUDIO of Branstad’s weekly news conference, at which the membership on the two boards was announced.

Below is information released by the governor’s office this morning regarding the membership on the two boards.

The members of the IPEP board include:

John Smith, Chairman of the Board, CRST International Inc.

The Governor also named the members of the Iowa Innovation Corporation board, the non-profit corporation that was established by the IEDA (as required by House File 590), that will serve as Iowa’s innovation intermediary.  The Corporation will operate independently with funding from the private sector and Federal grants.

The members of the Iowa Innovation Corporation board include: