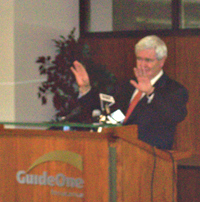 Republican presidential candidate Newt Gingrich is defending the “strategic advice” about home ownership he was paid to give  agencies in the federal government that are now lightning rods for criticism.

According to a Bloomberg News report, Gingrich was paid $1.6 million by “Freddie Mac” over an eight year period.

“If you can do it in a way that is financially sound, every American should be interested in expanding housing opportunities for people whether they’re African American or Latino or of any background,” Gingrich told a group of reporters this morning. “So the idea that you’re thinkg about how could we help people learn how to budget, how could we help them learn how save, how can we help people learn how to maintain a house on a low income would strike me as good things to do, not bad things to do.”

Listen to the exchange with reporters here. Gingrich does not use the phrase “political consultant” to describe his work for the agency. Instead, Gingrich characterizes it as offering “strategic advice.”

“But I’m happy to say I made public speeches to the National Association of Home Buildlers. I’m in favor of the largest possible home ownership. This is all public knowledge,” Gingrich said. “I’m in favor of doing the right kind of things.”

Other Republican candidates have been touting their outsider status. Texas Governor Rick Perry said yesterday in Iowa that Washington is broken and someone who’s been “an establishment figure” can’t fix it. Gingrich, in contrast, routinely touts his accomplishments as House speaker in the 1990s.

“It reminds people that I know a great deal about Washington and if you want to change Washington, we just tried four years of amateur ignorance and it didn’t work very well,” Gingrich said this morning, “so having somebody who actually knows Washington might be a good thing.”

Gingrich was a member of congress for two decades and served as speaker of the House from 1995 to 1999.