You are here: Home / News / Governor does not yet have overall target number for state budget (audio) 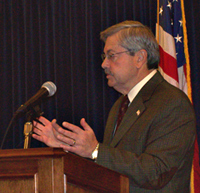 Governor Branstad begins meeting with his top managers this week to review plans for the next state budgeting year that begins July 1.

Republicans in the legislature insisted the current year’s state budget be less than $6 billion, but Branstad does not have a target number for overall spending in the coming year.

“We don’t have a magic number,” Branstad says. “You from my perspective the key is this, that you spend less in on-going spending than you have in on-going revenue.”

“That’s why we think this can be a shorter session because there won’t need to be the fighting over all the big budget items,” Branstad says. “Those have already been resolved.”

The level of general state payments to schools for the coming year was settled during that debate, and that’s the largest share of the annual state budget.  The 2012 Iowa legislative session begins January 9.