You are here: Home / Sports / ISU coach not worried about letdown after big upset win 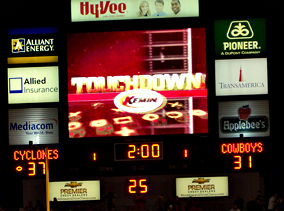 The scoreboard told the story in ISU's upset win over Oklahoma State.

Iowa State coach Paul Rhoads says the Cyclones are not satisfied with just qualifying for a bowl game.

The Cyclones improved to 6-4 with a shocking upset of second ranked Oklahoma State and now get ready for an upcoming trip to Oklahoma.

Rhoads says he has mature group that understands that you have to win six games to get to a bowl and win one, but he says they also understand how they have to prepare to win this Saturday.

Rhoads hopes last Friday’s win will have a long term impact on the program. He says they have to continue to enhance their recruiting and to “strengthen our already loyal fan base.” He says he’d like to maintain the trend where they had over 50,000 fans at the six home games, the first time that’s happened in school history.

Cyclone junior linebacker A.J. Klein has been named the Big 12 defensive player of the week. Klein had 14 tackles and forced a fumble in the win. Rhoads says Klein deserves the award, and he is happy that a Cyclone has received the honor after feeling they could have won in past weeks.

With two games remaining in the regular season Rhoads says there is still a lot that could be accomplished. He says they are closing with three teams in the top 15 and have already knocked off the third rated team.

Rhoads said last week that a victory over Oklahoma State would be a “monumental upset”. He says the same thing applies to the game at Oklahoma. “Our kids know they are decided underdogs for good reason,” Rhoads says. He says the Cyclones are 5-68 against the Sooners and the last time they won in Norman was 1990.

Rhoads says to have a chance the Cyclones will need to deal with the speed at which the Sooner offense plays. He says that’s the demoralizer of their talent, the speed they run their offense at. He says they did not answer in the game last year and were embarrassed.

Oklahoma may be out of the national championship picture but coach Bob Stoops says the Sooners still have plenty to play for. Despite last week’s loss at Baylor the Sooners would win the Big 12 with victories over Iowa State and Oklahoma State to close the season.

Stoops says it’s great motivation, and he says with everyone playing each other it’s a chance to be a true champion. He says anytime you are the champion of your league it’s a great year, and they still have the opportunity to do that.

Stoops says success of a season does not hinge on the national championship race. He says to have one goal to win the national championship “isn’t always very realistic.” Stoops says he is not surprised by Iowa State’s success. He says Cyclone coach Paul Rhoads does a great job coaching and says he knows several members of the state. Stoops says he knows Iowa players in general are tough hard-working guys that play well.