You are here: Home / News / Protesters confront Gingrich; candidate calls them “one-tenth of one percent” 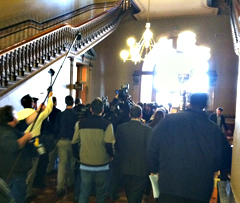 A long row of TV cameras and a large contingent of reporters were gathered in a conference room as Gingrich stepped to the microphone.

There were no arrests. The protesters were escorted from the room.

Gingrich was in the room to accept an endorsement from the speaker of the Iowa House. (Read and hear more about that here.) A few moments later, another protester who had remained in the room started challenging Gingrich, and the candidate said he’d “be glad to talk (to the man) outside” after the news conference.

“I think of all the candidates we’ve had I have a fairly long record of being willing to talk to a very wide range of people,” Gingrich said before launching into a general statement about the 2012 campaign.

Gingrich answered questions from reporters for another 10 minutes, then a large media throng followed Gingrich out of the statehouse as the handful of protesters shouted questions and statements at Gingrich. Gingrich and his wife were escorted by a clutch of state troopers and Gingrich’s own security team.