Mitt Romney addressed his supporters about two hours before the final tally was revealed. “Thank you so much for all your help. On to New Hampshire,” Romney said. “Let’s get that job done. Come visit us there. We’ve got some work ahead.”

It appears Romney came within six votes of receiving the exact same number of votes as he did in the 2008 Caucuses. Romney made a point of citing the different kind of Iowa campaign he ran this time. “When I ran four years ago, we had 52 members of our full-time staff. This time we had five,” Romney said. “You guys have done the work.”

Rick Santorum’s closing campaign surge ended late in the evening Tuesday as he told his followers that his finish in the Iowa Caucuses has served notice.

“Game on,” Santorum said to the cheers of the crowd. The former Pennsylvania senator said his big finish here was due to hard work — a work ethic he said came from his immigrant grandfather. Santorum said the central issue of the campaign is freedom.

“Whether we will be a country that believes that government can do things for us better than we can do for ourselves. Or whether we believe as our founders did, that rights come to us from God, and when he gave us those rights, he gave us the freedom to go out and live those rights out, to build a just and great society, not from the top down, but from the bottom up,” Santorum said. 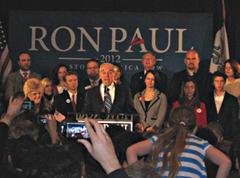 Supporters of Ron Paul are likely disappointed with his third place finish in the Iowa Caucuses after recent polls had him as one of the top two candidates. The 76-year-old Paul addressed his backers at a hotel in Ankeny and said his campaign for president will continue.

“Tonight we’ve come out…and we essentially have three top vote getters,” Paul said. “We will go on, we will raise the money and I have no doubt about the volunteers. They’re going to be there. I think there’s nothing to be ashamed of, everything to be satisfied…and be ready and raring to move on to the next stop which is New Hampshire.”

Paul finished fifth in the Iowa Caucuses in 2008 with just 12,000 votes. He more than doubled his support this year. “We had the task, and we were very successful, of reintroducing some ideas Republicans needed for a long time – that is the conviction that freedom is popular,” Paul said to cheers from his supporters.

Newt Gingrich finished fourth and vowed to go on to New Hampshire. “The Iowa experience and the New Hampshire experience — the places where you actually you have to see people,” Gingrich said. “You can’t just buy TV ads or use robo-calls, but in the end, it’s people.” Gingrich blasted the “avalanche” of negative ads from competitors. 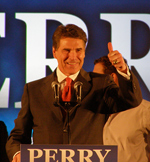 Texas Governor Rick Perry finished a disappointing fifth and announced he would return to Texas and “determine whether there is a path forward for (himself) in this race.”

“You know when I began this campaign a little more than four months ago, I didn’t do it because it was a life-long ambition to be president of the United States,” Perry said. ” I did it because our country was in trouble…and it was my duty to serve my country one more time.”

Perry was a U.S. Air Force pilot. He is currently the longest-serving governor in America and when Perry jumped in the race in August, he jumped to the lead in many polls, only the tumble after poor performances in televised debates.

“With a little prayer and a reflection, I’m going to decide the best path forward,” Perry said. “But I want to tell you there has been no greater joy in my life that to be able to share with the people of Iowa and this country that there is a model to take this country forward and it is in the great state of Texas.”

Iowa-native Michele Bachmann finished last among the six candidates who competed here, but she told supporters there are “many more chapters to be written” and she’s going on.

“The people of Iowa have spoken and they have written the very first chapter in this long journey to take our country back from Barack Obama,” she said. “And make no mistake, we will.” Bachmann entered the race in June and won the Iowa G.O.P.’s Straw Poll in August, but the topsy-turvy nature of the race saw her quickly fall from prominence. Her back-of-the-pack finish, she