You are here: Home / News / DNR encourages donations to the Fish and Wildlife fund 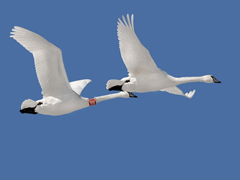 A wildlife biologist with the Iowa Department of Natural Resources is asking Iowans to consider donating money to wildlife conservation when they fill out their state tax form.

Fewer than 8,000 people chose to donate to the Fish and Wildlife Fund during the 2010 tax year and Stephanie Shepherd says it could be because tax preparers may not ask whether a client wants to donate.

“A lot of times the tax preparer may forget to ask about that or gloss over that,” Shepherd said.

“So, if someone doesn’t go into their tax preparer, kind of ready and knowing that they want to give and bring that out up front, sometimes it can be overlooked and won’t even be asked about.”

The nearly 8,000 people who donated to the tax checkoff last year represents just 0.5% of Iowa’s taxpayer population. Still, Shepherd said the $127,000 in contributions marked the first increase in donations since 2007.

“It was a nice little bump. It’s still significantly less than it was in the past, but it’s always nice to seeing things going up rather than down,” Shepherd said. The Fish and Wildlife Checkoff and other checkoffs appear on line 58 of electronic and paper versions of Iowa’s 1040 tax forms.

All proceeds from the checkoff support the D.N.R.’s Wildlife Diversity Program. “We’re in charge of all those species you can’t hunt, fish or trap. So, pretty much anything you can think of – from leopard frogs to bald eagles. That’s what we’re in charge of and that adds up to be over 1,000 species,” Shepherd said.

She credits the checkoff with the successful comebacks of species such as the peregrine falcon, trumpeter swan and osprey.