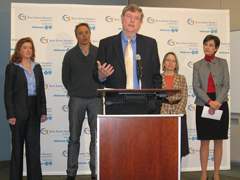 John Forsyth talks about the expansion of the Blue Zones project.

Iowa’s largest health insurer is expanding it’s “Blue Zones” project in an effort to help make Iowa the healthiest state in the nation by 2016.

At a press conference today, Forsyth said the enthusiasm and response to the program has surpassed expectations. “So, what we decided to do is expand the number of communities involved,” Forsyth said.

“Instead of having 10 (communities) over five years, we’re now saying not less than 30 over five years.” The cities and towns selected as demonstration sites will be given expert advice on how to improve their residents’ overall health through exercise and proper diets.

“We have a great deal at stake when we think about this…the future of Iowa, in a sense, is at stake,” Forsyth said. “We have the opportunity to improve the health status of not only current Iowans, but future generations of Iowans.” Wellmark’s Blue Zones project is part of Governor Branstad’s campaign to make Iowa the healthiest state in the nation – as measure by the Gallup-Healthways Well-Being Index.

Lieutenant Governor Kim Reynolds said the initiative could help redirect funds – currently spent on health care – to projects that’ll grow the state’s economy. “If we, as a state, can simply maintain our current rate of obesity…we can save as much as 16-billion dollars over the next five years,” Reynolds said.

“But, let me tell you, the status quo is not acceptable. That is not what this program is about. We’re about doing it right, doing the right things and we’re about becoming the healthiest state in the nation.” Wellmark committed last year to spend up to $25 million on the Blue Zones project.

Forsyth said the expansion plans announced today will add up to $3 million to that commitment. Eleven “larger” Iowa cities have been chosen as finalists to be among the first three or four cities selected as demonstration sites. Those cities are Ames, Cedar Falls, Cedar Rapids, Clinton, Davenport, Mason City, Muscatine, Ottumwa, Sioux City, Spencer and Waterloo. A similar list of “smaller” towns will be announced in March.