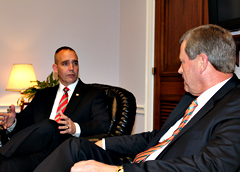 But, Congressman Bruce Braley says it sounds as if Donley and other Air Force officials aren’t going to waiver from their recommendation to shut down the 132nd Fighter Wing based at the Des Moines Airport.

“It sounded like, in their minds, the decision had been made,” Braley said. “That obviously was not received well by anyone in the (Iowa) delegation since we had, we felt, some very valid arguments why this was not in the best interest of U.S. taxpayers.”

Braley, a Democrat from Waterloo, said the 132nd Fighter Wing is one of the most cost-efficient units in the Air Force. “It was pretty obvious that there was not a lot of comprehensive cost-benefit analysis that went into the decision making,” Braley said after he and other members of Iowa’s Congressional delegation met with Donley in Washington, D.C.

Congressman Tom Latham, a Republican from Clive, also attended the meeting. “They said, ‘well it wasn’t really based on a cost-benefit analysis, it was more of a judgment call.’ That’s apparently how the White House came up with the idea of eliminating the (132nd Fighter) Wing in Des Moines. It’s simply without a good basis or rational for this decision,” Latham said.

The cost cutting proposal is expected to be part of President Obama’s budget plan. “So, we’re going to wait until the President puts it in writing in his budget, which will be released on Monday, and then determine the course of action,” Latham said. Air Force leaders have suggested retiring the F-16 squadron in Des Moines by October 2014.

Here are some of the statements from Iowa’s Congressional delegation:

“The Air National Guard, including the 132nd Fighter Wing, has played a critical role in defending our states here at home as well as our nation overseas, and I will continue to fight for them.”

“It is becoming clear that the White House’s plan is not based on any sort of cost-benefit analysis to find the most efficiency or savings. Instead of simply reducing equipment and personnel, prudent use of the National Guard will allow us to maintain valuable experience and expertise at a lower cost, since it is available on an as-needed basis. The 132nd Fighter Wing has some of the most experienced F-16 pilots and maintainers in the force, with around four times the amount of flying time and years of experience as their active duty counterparts. Since these particular capabilities would take years if not decades to reconstitute, eliminating them contradicts the administration’s own military strategy released last month, which insists on “reversibility” in any reduction in capabilities to ensure they can be quickly regenerated if the need arises to address future threats.”

“I stand by my insistence that the White House must request a reassessment of the plan, and I’m confident we can find a way forward that’s acceptable to the Pentagon, the White House, the Iowa National Guard and the people of Iowa.”

WASHINGTON, D.C.- Senator Chuck Grassley made the following comment after a meeting he hosted today for members of the Iowa congressional delegation with the Secretary of the Air Force regarding Air Force budget reduction recommendations to retire the 21 F-16 fighter aircraft assigned to the 124th Fighter Squadron, Iowa Air National Guard in Des Moines. The meeting was held in the U.S. Capitol.

“A lot of mixed signals were sent by the Air Force in today’s meeting. The Iowa congressional delegation is on the same wavelength and committed in a bipartisan, bicameral way to getting the data that the Air Force said it used to make a decision that the Air Force claimed was based on a cost-benefit analysis. We want this data in order to reconcile an additional comment made by Air Force officials in today’s meeting that judgment, beyond the data, was also involved in its decision. This judgment comment detracts from the Air Force statement that everything was measured for cost and benefit. Overall, it’s a question of safeguarding national security dollars because the Guard has shown to be more cost effective for missions such as a fighter squadron than the Active Duty, and Guard pilots tend to be more experienced since they stay in the service over a long period of time. The discouraging part is that my feeling was that the Air Force has made its decision, but it will be up to Congress to decide whether to approve the Air Force plan and National Guard advocates in Congress are already signaling that they won’t go along quietly with the Air Force’s plan to take so many cuts out of the Air Guard.

“I left today’s meeting with more questions about the future of the Air National Guard than when I first entered the room. We have to take a hard look at the proper balance between the active force and that of the guard and reserve. I have not been given the data that tells me the Air Force has done that. And though the proposal to decommission the 132nd’s F16s is not final, the Air Force still cannot provide an adequate explanation for targeting Des Moines, the cost-effectiveness of decommissioning this unit, or the impact it will have on the local community. These are answers that must not only be provided to the Congressional delegation, but to all Iowans in this community.

“The 132nd is among the best in the country and we will do everything in our power to keep them flying.”