You are here: Home / News / Statehouse ready for special dinner with the Chinese vice president 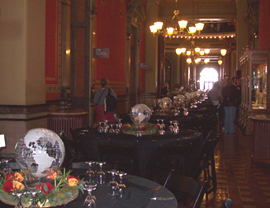 Tables set up at the capitol for the state dinner with the Chinese vice president.

The vice president of China is due in eastern Iowa late this afternoon for a reunion with people who hosted his 1985 visit in the Muscatine area.

Xi Jinping will then fly to Des Moines where he’ll be honored with an elaborate statehouse banquet this evening.

Protesters have arrived in Des Moines to raise concerns about human rights abuses in the communist nation. House Speaker Kraig Paulsen, a Republican from Hiawatha, will be one of the 650 guests at the event.

He acknowledges China wasn’t always praised during the G.O.P. presidential candidate events in Iowa this past year.

“China obviously has a unique history and that’s just the way it is,” Paulsen says. “At the same time, China is a huge trading partner with Iowa and I think this is a big night for Iowa.”

One-hundred-sixty-five people will be part of the Chinese delegation, including China’s ministers of agriculture and commerce.

At mid-day, Governor Branstad was already sporting the red tie and black suit he’ll be wearing for tonight’s festivities.

“It’s an opportunity to make new friends and build what I think can be an even closer relationship in the future,” Branstad says. Governor Branstad and Vice President Xi will deliver toasts to begin the evening.

There will be a private exchange of gifts. Branstad has selected artwork created by Iowans as his gift to Xi.