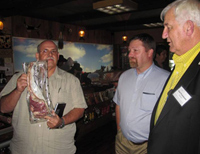 Around a dozen Iowans have returned from a week-long agricultural trade mission to Central America. Bill Tentinger, president of the Iowa Pork Producers Association, says there’s currently a 70% tariff on U.S. pork imports to Panama. But, that will change soon.

“I think by 2014, the tariff will start going away and there’s a possibility that we could be getting product in there tariff free. When you’re paying 70% tariff on a product, it really limits how much you’re going to sell,” Tentinger said. The LeMars resident was part of the Iowa delegation that traveled to Panama and Guatemala earlier this month.

Tentinger said there is a market for U.S. pork in the two countries, but it’ll take time to develop. “There is a small amount of pork being moved into those countries and because of that fact, I would say there is no place to go but up,” Tentinger said. Dan Cook, who raises Angus cattle near New Providence, said Panama holds great potential for increased imports of U.S. beef.

“The economy’s growing fast and tourism is going to be a big part of that,” Cook said of Panama. “So, therefore, with more disposable income – people want to eat better and high quality beef is right at the top of the list it looks like.” Cook notes that price is the biggest issue in Guatemala, as 70% of their population lives in poverty.

“They’re probably going to take some lower value cuts that we typically don’t enjoy in the U.S.,” Cook said. “That helps raise the whole value of the beef carcass, so that’s still a good thing.” The trade mission, which also included representatives of Iowa’s corn and soybean industries, was coordinated by the Iowa Economic Development Authority and the U.S. Meat Export Federation.